Chris Froome and Geraint Thomas to race in Devon 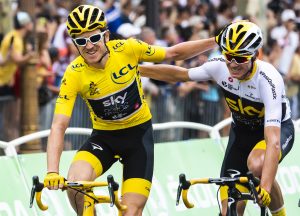 Alongside Geraint will be Chris Froome, OBE, who is the reigning Giro d’Italia and Vuelta a España champion and four time Tour de France winner.

Chris  is considered the leading Grand Tour rider of his generation and the first rider to have held all three Grand Tour winners’ jerseys at the same time since Bernard Hinault in the 1980s.

Stage Two of this year’s Tour of Britain starts in Cranbrook, East Devon, and covers 174km (108miles) of stunning countryside across East Devon, Mid Devon and North Devon before finishing in the historic estuary town of Barnstaple.

Councillor Stuart Hughes, Devon County Council’s Cabinet Member for Councillor Stuart Hughes Highways, said: “It’s fantastic news that this Tour of Britain will see the biggest names in cycling like Froome and  Thomas compete.
“The fact that the Tour regularly attracts the biggest names in world cycling demonstrates the global stature of the competition.

“I’m sure everyone will be delighted to welcome Chris and Geraint to Devon. With both of them racing through our county we can expect plenty of visitors and an excellent turnout right across Devon again – which is great news for the local economy. “

Councillor Tom Wright, East Devon District Council’s Portfolio Holder for Environment said: “This stage of the Tour of Britain shows what is great about Devon, starting in the country’s newest town at Cranbrook, travelling through our outstanding countryside and finishing in one of our wonderful historic towns. We’re very much looking forward to it.
“In view of Geraint Thomas’s outstanding win of ‘Le Tour’ and that Chris Froome is going to be racing, the stage will have special significance.”

Councillor Dick Jones, North Devon Council’s Executive Member for Parks, Leisure and Culture, said: “This is wonderful news for the Tour of Britain and North Devon that this year’s winner of the Tour de France, Geraint Thomas and previous winner Chris Froome will be taking part and racing through the district. It’s a great opportunity for our residents to see some real sports stars in action and hopefully become inspired to get out there and enjoy the area by bike.”